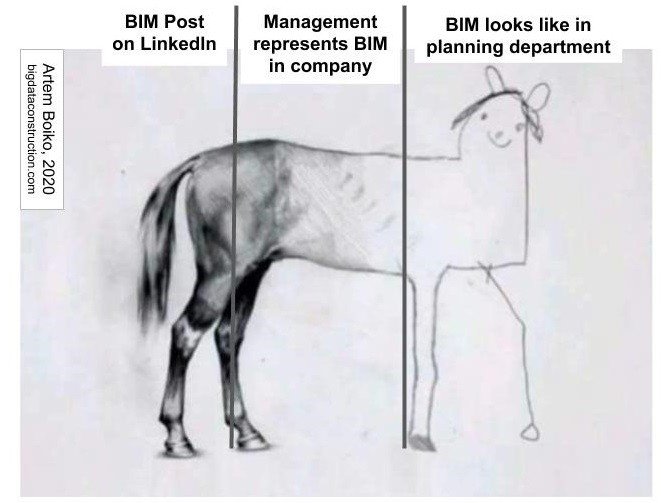 In the 17th century, every advanced Dutch farmer wanted to get hold of a tulip; in 2017, an advanced internet user wanted to buy Bitcoin. Nowadays, every advanced construction company dreams of using 3D-7D BIM in their planning and the competitive advantages that this technology will bring them.

This series of articles focuses on the uneven development of BIM across countries. This topic cannot be started without a short excursion into the history of the emergence of BIM programs or, more precisely, the data formats that have now led to a lobbying struggle for the possibility of planning $10 trillion of new construction contracts each year and, as a result, to a very uneven development of BIM in different countries.

In this article we will answer the question: where did STEP, IFC and buildingSMART come from, how a Soviet mathematician helped AutoCAD to conquer the world market for СAD and why Autodesk rarely mentions Revit in its financial statements.

The main events tree will help you follow the information presented in this article. To add a comment to this diagram or to consider in more detail individual fragments of the map, follow the link: BIM development map from 1980 to the present

Creation of IFC and buildingSMART

How did the active introduction of BIM begin, without which it will be impossible to imagine the construction of any facility in any country in the world already in 2030?

Like much in this world, BIM began with a conflict -> an arms race and -> military technology, or rather, with the STEP format(Standard for the Exchange of Product model data). This format was created at the end of the Cold War between the USSR and the United States by companies involved in the design of complex military equipment in the first 3D modeling programs. After the military firms only oil and gas firms were the first to use these technologies where large profit margins allowed oil corporations to use these new “very expensive” technologies, which were still in their infancy.

The conflict between two giants ended with the defeat and collapse of the Soviet Union in 1991. The level of orders for military equipment and missiles declined, and the military bureaus repurposed their work for the civilian sector.

The margins in the production of “pots and buildings” are less than in the production of tanks and aircraft, so interest in the further development of the 3D STEP format began to wane, and the creators of CAD (computer-aided design) for the military industry reoriented to the less profitable civil engineering industry.

At the same time, by the end of the 80s, the new AutoCAD program, as the flagship product of the young Autodesk company, just 4 years after its creation, became the most widely used 2D CAD software in the world.

Along with the success of the DWG format for 2D modeling, Autodesk began to look towards a new promising direction – 3D design, while the question arose of creating a new format that will replace DWG and STEP.

By this time, the peak of popularity of the military STEP format had already passed, but at the same time it remained the leader of the still little-known 3D design. Since a rich infrastructure has already been created around the STEP format in the form of a mass of specifications in the status of ISO standards, this format attracted the attention of Autodesk, which, after the success of its first AutoCAD program, was engaged in the development of new products for various industries, including architecture, civil engineering and mechanical engineering.

Developers of the new format from Autodesk did not have a rich imagination, and they did not have the opportunity to apply it – they were given very modest deadlines, and the task looked very global. Therefore, they took as a basis the old military STEP format, or rather Application Protocol 225. More on this in the third part:

To take control of the creation of a new format, standards and their further development, Autodesk, together with a cartel of consulting and telecommunications firms, creates a new format IFC to replace the outdated STEP.

So in 1994 the “new” IFC format was born, which in the future will successfully replace the STEP format. It can be assumed that the format itself was fully developed by Autodesk, and its further development should have taken place under his strict guidance, and the standards and rules for use for this new format were written by the rest of the parties to the transaction, who established the rules according to their needs.

But at the same time, within a year, the comrades from the newly assembled consortium – by their own will or by duress – come to an understanding that the IFC format should become open and be developed by an organization with open membership. Or perhaps the cartel has been able to translate all their fantasies into this format and the standards they have written in a few years, and now they can provide access to this wonderful IFC format – to the whole world.

Thus, in 1997, a new and already renamed consortium appeared – the International Alliance for Interoperability. In 2005, the organization with an incomprehensible abbreviation IAI was renamed into a more hype and understandable name – buildingSMART.

With the beginning of the era of wild capitalism that arose in the Soviet Union after the defeat in the Cold War, the best physicists and programmers emigrated to America, where, unlike the Soviet Union, they could find their use.

At the same time when Autodesk created IAI, in 1997, the Soviet mathematician from St. Petersburg, Leonid Raiz, who emigrated to the west coast of America after graduating from Leningrad State University and even before the collapse of the Soviet Union, founds a new company – Charles River Software – and begins to develop a new software for 3D design named Revit. Real product development began in 1998 with the involvement of mathematician Irwin Jungreis and investment from Atlas Venture. With the first release in 2000, the program will be called Revit.

From its inception, Revit was designed to enable architects and other construction professionals to design and document buildings by creating a parametric 3D model that includes both geometry and non-geometric design and construction information, also known as Building Information Modeling or BIM.

Two key differences in Revit from the solutions already existing at the time (for example, from Archicad) were that users created parametric components in a graphical “family editor”, and not in a programming language, and the model captured all the relationships between components, views and annotations, so that any change is automatically propagated to the entire model.

The following video shows how much Revit’s functionality has changed over the past 20 years. If you launch such Revit 2002 today, there will probably be someone who will not even notice the difference with Revit 2020.

REVIT is the world leader in planning

After the creation of the world 3D format IFC Autodesk wanted to replace AutoCAD. After the great flop of Architectural Desktop – actually Autodesk Architecture (BIM with DWG 🤷‍♂️), of which today not even they speak anymore, but much of its structure is still used in Civil3D, Autodesk pure could not be competitive in BIM at this time and had only important global customers, including the military industry.

At the same time Autodesk, seeing the enormous potential of Revit´s new design methods, which Raiz and Jungreis have been developing for 5 years, bought the entire company and Revit software in 2002 for $133 million.

From that moment, that is, since 2002, Autodesk’s 📈 revenue from Revit products begins to double every quarter . Just 4 years after the purchase, Autodesk sold over 15,000 commercial Revit licenses per quarter. Revit instantly became a gold mine for the entire Autodesk consortium. If in 2005 Revit (together with Civil3d) accounted for 15% of all Autodesk’s net revenue, then just a year later, in 2006, it was already 25%.

Since 2007, references to Revit have disappeared from Autodesk’s financial statements, and in subsequent financial statements for the year it is difficult or, more precisely, it is no longer possible to find data on the number of purchased Revit licenses and the total percentage of $ 3.4 billion in annual revenue that Revit brings to the company Autodesk.

One can guess from the parabolic distribution of Revit as a design standard that today the main revenue and profit of Autodesk consists of the sale of Revit licenses and products built for it, such as, for example, BIM360. It was a great deal in 2002 and continues to drive the growth and movement of the entire Autodesk company today.

Excerpt from a 2019 Forbes article (Forbes Councils Member – Mitchell Hughes): “3-D printing likely wouldn’t exist if not for Leonid Raiz. Nor would the Boeing 777 jet. Nor would Revit, the $20 billion industry standard today in BIM, where 3-D models of buildings are designed and architected and where buildings come to life.”

One of the most important factors in the development of the economy of any country is the emigrant scientists. Which, after an average of 10 years of difficult assimilation in a new environment, give their energy to the locomotive of the economy for some time. Thanks to the cold war between scientists of the two countries, from the same period, since the late 1990s, the same physicists / mathematicians – emigrants (or their children) from the Soviet Union, who have already settled in America – have founded startups such as Google – Sergey Brin, Paypal – Max Levchin, WatsApp – Jan Koum, Ethereum – Vitalik Buterin et al.

What are we getting by the beginning of the 2000s? The “new” IFC format is like a new version of the outdated military STEP format, and Revit is gaining momentum with its new design methods and new data format. The undisputed leader of the past years, Archicad is gradually giving up the market to Revit. Allplan, which started in 3D at the same time and under the same conditions as Revit, cannot pick up speed and is only able to sell itself in Europa.

The next article will take a closer look at the use of different planning products – Archicad, Allplan and others in different countries, the battle for the CAD market and the related challenges.

If you suddenly work in one of the companies mentioned in the article and you suddenly have additional information on the topic (or you do not agree with the facts presented here), I will be very grateful if you send me information in personal messages, or to my mail box: boikoartem@gmail.com

🙋‍♂️ I’m looking forward to your comments, criticism and to new сontacts: https://www.linkedin.com/in/boikoartem/

🙇 Thanks for sharing the article

Links to my previous publications: