Inflation and profitability in the construction industry. Rising costs of work in San Francisco. 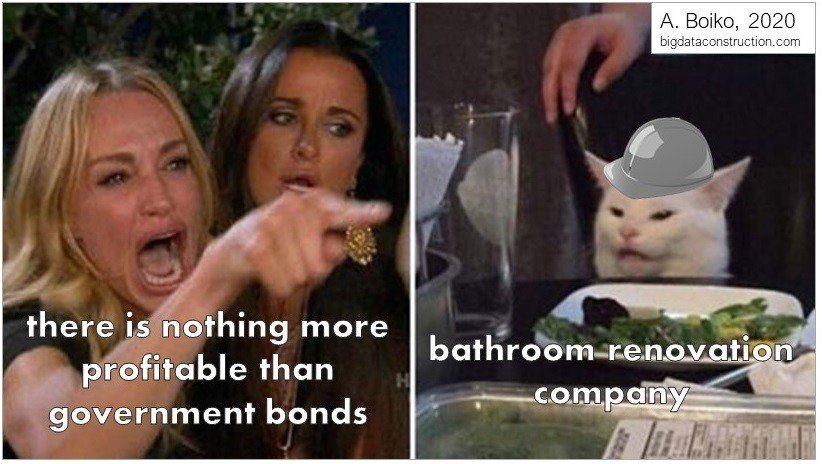 San Francisco is the world technological capital, whose example based on open data can be used to observe the development of the construction industry in megapolices. In this technologically advanced city, very pronounced economic cycles at different time intervals resulted in an explosive demand growth in various sectors of real estate.

The previous article looked at the total annual amount of construction (investment) in San Francisco between 1980 and 2018. The difference between the expected (estimated) and actual (revised) construction costs was used to track the dynamics of investor attitudes during periods of economic booms and crises in the region.

In this article, a closer look will be taken at individual construction sectors including roof, kitchen, stairs and bathroom repairs. After that, inflation for certain work types will be compared with official inflation data and other economic indices.

Conclusions discussed in this article:

The ups and downs of construction sectors by type of housing

Average cost of kitchen and bathroom renovations in San Francisco.

Average cost of roof and stair repairs in San Francisco

The total cost of a planned home renovation

Increase in construction costs over the past 30 years

Real rates and profitability in the construction industry

Charts and calculations were built in the Jupyter Notebook (on the Kaggle.com platform).

San Francisco’s hi-tech industry is one of the culprits behind the soaring prices. Hi-tech staff with six-figure salaries moving to the city to work at startups and more established companies (such as Google, Facebook, Twitter, and Apple) are dramatically increasing the cost of living and demand for housing. Programmers with pockets stuffed with “hi-tech” money can afford to outbid most of the locals in the real estate market.

At the same time, in terms of urban planning legislation, San Francisco is one of the most regulated cities in America. These and many other factors severely limit construction volumes and affect prices and demand in San Francisco.

Therefore, the leader in the demand for various housing types changes in each new economic cycle. Each housing type has had and will have its “ups and downs” in San Francisco construction market, such as a 10- time explosion in demand for apartments in a period from 2012 to 2015, or a hype demand (over 16- time growth ) for commercial real estate from 1997 to 1999.

In the article on the annual total amount of construction work, the price dynamics schedule for the period from 1980 to 2018 was divided into two components:

Let’s take a deeper look at the total cost data and move on to the “next layer” of data.

We divide the total cost of work into categories of work according to the parameter “type of housing” (“Existing Use”):

It can be seen that all types of real estate in different economic periods went through a rapid parabolic (hype) growth and a similar rapid decline.

If we combine these 4 main categories in one graph, we get the general rise and fall diagram of all investments in construction in the city of San Francisco, familiar from the first article.

Average cost of kitchen and bath renovation in San Francisco

Taking data from the “Description” Feature again, we can additionally select data for individual categories of work and the average costs of repairing a kitchen or bathroom in San Francisco for various types of housing.

Average cost of roof and stair repairs in San Francisco

According to the same Description Feature, we select only the lines containing the words “reroofing” (roof replacement) and “stairs” (stairs repair).

The cost of repairing a staircase is also double for a two-family home, because a single-family home normally has no staircase (or a single-span staircase).

The cost of a planned home renovation in San Francisco

It is recommended to renovate the kitchen and bathroom on average once every 10–15 years. Roof and stair repairs should be done once every 15–20 years.

In general, if “theoretically” 15 years after the house construction the kitchen, bathroom, roof and stairs should be repaired in the same year, in a single-family house you will need to save up $ 54,000 for this purpose , whereas for a two-family house this amount will be $ 61,000. The difference in the total cost of work in these four categories is only 15%.

Thus, after the construction of a new house, in order to do house repairs in four categories (kitchen, bath, roof, stairs), it is necessary to save $ 350 monthly, in order to accumulate the required $ 60,000 for repairs in 15 years.

The rise in construction costs in San Francisco

By taking the data by work category and grouping it by year, we can observe the growth (and inflation) of the average cost of repairs by housing type.

The following graph presents the data on the average cost by housing type, like in the previous paragraph, in a columnar form.

For visual display, the same graph, but in the form of columns, provides a clearer (“inflationary”) picture.

The average cost of roof repairs has been steadily increasing since 1990.

In contrast to residential houses, the average cost of renovating an apartment block roof in the same period went through numerous ups and downs.

Short-term 3-year cycles can be observed in the cost of renovating apartment block roofs.

However, in the repair of bathrooms, such cycles are not traced, and the growth in the average construction cost is more gradual. It is only the increased average cost of bathtub repairs in apartments that can be observed before the dot-com boom?!

Inflation in the cost of construction work in San Francisco.

In order to find the inflation of the average cost of repairs for the entire period from 1980 to 2019, we supplement the data with a trend line. When calculating inflation (taking the start and end points of the trend line), we find that the maximum inflation in value for the period from 1990 to 2018 occurred in the bathroom sector.

The average cost of bathroom renovation over the past 30 years has increased almost 5 times . The renovation cost has possibly increased due to the advent on the market of new finishing materials and expensive (though affordable) ceramics and sanitary ware.

In the same period from 1980 to 2019, the cost of stair repairs remained almost unchanged and the average cost inflation in this area of construction was only 85%.

Now for greater clarity, let’s imagine inflation growth dynamics on a single scale, where inflation varies from 0 to 9%, and look at the fall in annual inflation cost of repairs by category in the period from 1980 to 2019.

It is noticeable that annual inflation over the past 30 years has decreased in all categories by almost 2–4 times (for example, in roof repairs from 8% in 1990 to almost 2% in 2019). This completely coincides with the economic policy during this period (from 1980 to 2019).

Inflation dynamics in such categories as roof repair, bathroom and kitchen renovation, almost completely correlated with the dynamics of interest rates on 30-year loans (and, accordingly, with the yield on 10-year Treasury bonds).

A 30-year fixed mortgage is a loan, with the interest rate remaining the same throughout the loan term.

The 10-year Treasury rate is profit earned from an investment in the US government-issued Treasury securities with a 10- year maturity.

Real rates and profitability in construction

It can be seen that the change in the cost of works corresponds to the interest rate on government bonds. The graph by Paul Schmelzing (a professor at Harvard University) shows how global real interest rates have changed over the past eight centuries.

For comparison, the period considered in the article is marked in yellow.

Undoubtedly, industries profitability also decreases along with the real rate, which correlates with this rate. Primarily it concerns such ancient (long-standing/traditional) industries as agrarian industry and construction industry.

In the period from 2020 to 2030, we are most likely to see new record lows in real rates and, accordingly, a decrease in profitability in the construction industry. But if profitability declines, this may mean that productivity will increase by the same “missing” percent.

While in construction business there used to be a large margin of 10–15%, and companies did not need to consider introduction of new technologies (which actually were few), now we are entering a new era of low real rates and low margins of 2–5% where the main role in a construction company will be played by the availability of new tools and processes in the company’s work.

Tools and new technologies that can already be used in construction are currently in surplus.

It will take construction companies decades for these new technologies to find their way into the heavy-handed and conservative construction industry.

Around the time when self-driving taxis start operating in San Francisco, construction companies will gradually replace lower-tier planners with automated scripts and tools that use big data and machine learning technologies to maintain margins.

Links to previous publications on this topic:

You can learn more about working with Jupyter Notebook and about applying machine learning in construction: